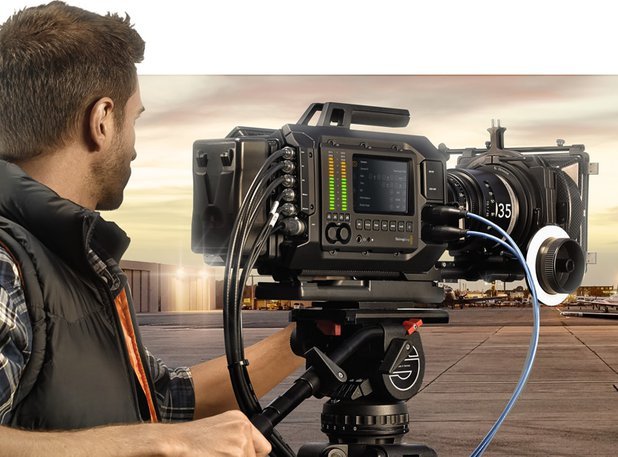 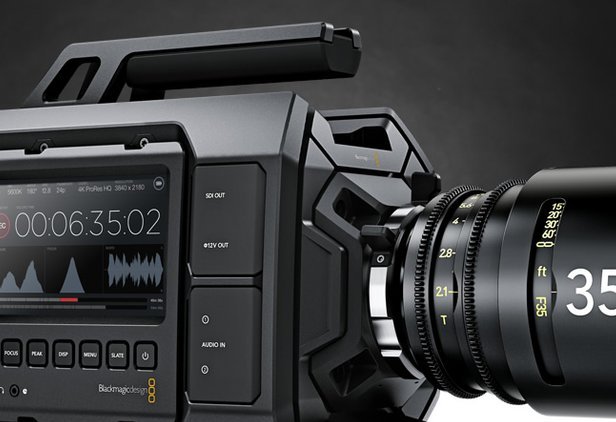 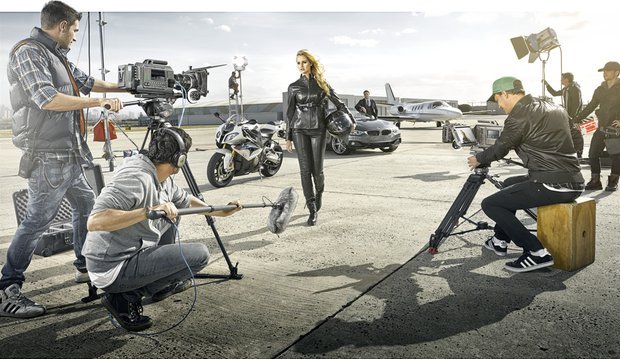 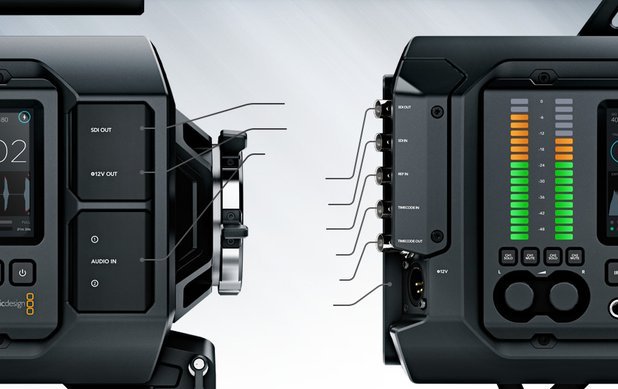 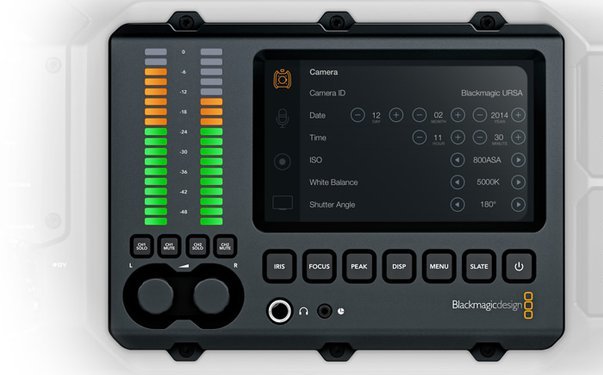 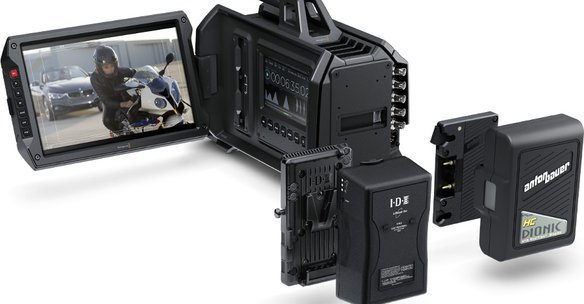 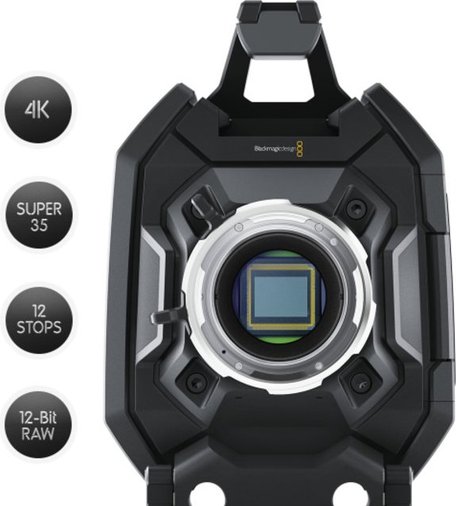 Introducing Blackmagic URSA, the world’s first high end digital film camera designed to revolutionize workflow on set. Built to handle the ergonomics of large film crews as well as single person use, URSA has everything built in, including a massive 10 inch fold out on set monitor, large user upgradeable Super 35 global shutter 4K image sensor, 12G-SDI and internal dual RAW and ProRes recorders. Because the sensor and lens mount assembly can be changed, you can choose EF or PL lens mounts, or even a broadcast video sensor with B4 mount. This means you can upgrade to the latest sensor technology in the future and keep your investment in the camera body!

Blackmagic URSA is designed to be used on high end feature films, commercials, episodic television production, documentaries, electronic news gathering, music videos and more. When used on jobs with a large crew you can easily dress the camera with high quality cinema lenses, rails, follow focus, matte boxes and more. With built in scopes for exposure, focus and audio levels, it’s easy for DOP’s to get perfect results every time. The dedicated screen for camera assistants lets them check and update camera parameters independently of the DOP. If you’re shooting solo then the large fold out on set monitor, built in scopes and internal recorder means you don’t need any extra on set equipment because it’s all built into the camera. That’s a whole film set of equipment built into the one extremely portable design!

All your on set equipment built into one portable design!

The Blackmagic URSA features a larger professional size that has the space for powerful cooling that allows higher frame rates while keeping the chassis cool and the fan super quiet. The machined aluminum design is incredibly strong and has been designed for large film crew use and to be field upgradable to new sensors by the user. Each area of the camera has been divided into separate DOP, camera assistant and audio engineer work stations. The DOP station features a large 10 inch fold out on set monitor and separate 5 inch screen for settings, camera status and scopes. The camera assist station features a separate screen for camera settings, status and scopes and an audio station features audio meters, controls and audio connections. The big screen means you don’t need extra on set equipment so it’s easy to move around quickly between shots. Simply fold in the monitor and go!

URSA is a true professional digital film camera with a 4K sensor, global shutter and an incredible 12 stops of dynamic range. The wide dynamic range blows away regular video cameras or even high end broadcast cameras, so you get dramatically better images that look like true digital film. The wide dynamic range preserves detail in dark shadows as well as bright highlights so you have a wider range of brightness levels to work with when color grading in post production. The extra large Super 35 size allows for creative shallow depth of field shooting and the high resolution Ultra HD 12 bit lossless Cinema DNG RAW means you get incredible quality! You can also shoot Ultra HD or HD in Apple ProRes for easy post production workflow with minimum storage requirements!

Keep recording forever so you never miss a critical event!

Blackmagic URSA features dual recorders so you never need to stop recording to change media. That’s critical if you are shooting an historical event, important interview or where you just cannot stop shooting! Simply load an empty CFast card into the second recorder and when the current card is full, the recording will continue onto the second card, allowing you to change out the full card and keep shooting! The built in recorders use new CFast card technology that allow recording up to 350 MB/s for incredible speeds, perfect for high frame rate RAW recording! Imagine shooting RAW and then playing back for the crew on the massive 10 inch screen!

Choose from a range of sensors and lens mounts!

The Blackmagic URSA features a modular camera turret that can be simply removed by removing 4 simple bolts! The camera turret includes the sensor, lens mount and lens control connections and can be upgraded in the future when new types of sensors are developed. This means your next camera will be a fraction of the cost of buying a whole new camera! There are currently 4 models to choose from!

URSA EF includes the amazing 4K Super 35 image sensor with global shutter and an EF lens mount with active lens control. Now you can use low cost DSLR photo lenses from companies such as Canon, Zeiss and more!

RSA Broadcast, due later in 2014, features a whole different sensor optimized for Broadcast Video in Ultra HD, combined with a broadcast B4 lens mount and broadcast lens control connection plus built in ND filter wheel.

URSA HDMI includes no sensor because it features an HDMI 4K input and mount plate for connecting any camera such as DSLR cameras! Get much better ProRes recording, monitoring, audio and timecode than what is ever included on simple video or DSLR cameras!

Built in On Set Monitoring!

Massive Viewfinder as a

Say goodbye to bulky on set monitors because you get a massive fold out 10 inch screen built into Blackmagic URSA, making it the world’s biggest viewfinder! The screen is super bright so it’s easy to see when shooting outdoors, even in direct sunlight, plus it features an ultra wide viewing angle so you can pan and tilt to extremes and still see crystal clear images. When shooting in Ultra HD, focus becomes extremely difficult on small viewfinders, however with a massive 10 inch screen in full HD, you can see your images in amazing detail for perfect focus, framing and exposure! Because the screen tilts you can shoot down low, or high up over crowds and easily tilt the screen up or down to see your shot!

Get full control on both sides of the camera!

URSA features the world’s most intuitive and advanced touch screen camera user interface! There are two 5” touch screens on both sides of the camera that put your settings, controls and monitoring tools at your fingertips!

The left side gives you quick access to all major settings via a touch screen and a row of control buttons. That means you don’t have to hunt through complicated menus to make changes!

The right side displays settings like format, frame rate, shutter angle and more! There is a large prominent timecode display, an animated histogram for checking levels, a scrolling audio waveform monitor with clipping indicators and a spectrum scope for helping you check and adjust focus!

The Blackmagic URSA features standard broadcast connections so you don’t need to worry about buying expensive custom cables! You get 12G-SDI output that can be down converted to HD or used directly at amazing Ultra HD quality. There’s also a 12G-SDI input that can display return video on the 10 inch monitor when working on live events or an external video source! A separate SDI output is available for attaching external viewfinders and eye pieces. For audio, there are 2 professional XLR connections with 48v phantom power so you can use the audio industry’s best quality microphones. You also get timecode in/out and a LANC connector for controlling the camera, lenses, and accessories remotely.

URSA uses a standard 4-pin 12V to 30V XLR broadcast power connector for plugging into external power supplies. There are also mounting points and a power transfer connector for mounting third party V-Mount and Anton/Bauer gold mount back plates and batteries onto the rear of the camera itself. This means you can integrate the battery as part of the camera itself. You also get a standard 4 pin XLR 12V output power connector so you can use a wide range of third party viewfinders without needing expensive custom cables. That means it’s easy to integrate the camera with all of your existing gear and accessories!

Designed to be Rigged!

Customize your rig to suit your production!

To make it super easy to bolt on your favorite accessories, Blackmagic URSA has multiple mount points all over the camera. You get standard tripod quick release attach points on the bottom of the camera, so you can use industry standard tripod mounts. The viewfinder connection uses standard power and BNC SDI connections for any type of viewfinder, plus there is standard 3/8” threaded points on the top and handle of the camera for mounting anything you like! Standard battery mounts can be bolted to the rear of the camera and you can use standard rails in the rail mounts built into the camera base. No camera is so easy to rig up for any type of production!